Ballroom gowns or ball gowns are the most formal social attire for women. They are always full-length, often full-skirted and elaborately trimmed with lace, sequins, pearls, ruffles, embroidery or ruching. Ballroom gowns with décolleté or low-cut necklines are usually worn with a delicate shawl (or a cape/cloak when going for a more vintage look). Women will typically wear dancing shoes with their ball gowns, with a matching clutch bag or small purse. Fabrics most favored for ballroom gowns are silk, satin, velvet and taffeta.

A quick look into the fascinating history of the ballroom gown will bring us back to the time of Philip the Good, Duke of Burgundy; a veritable Renaissance Period fashionista. His court was the most magnificent court in Europe at the time, famous for its expensive taste and high fashion. Today’s ballroom gown was called “court dress” then, predominantly made from silk and wool as rich fabrics and fibers were indicative of social status in 15th century Europe. The dresses were trimmed with expensive furs, again to emphasize wealth and social standing.

By the late 18th century, the “court dress” began to be called evening or ball gown as attending court was no longer the sole social occupation of the rich and famous. Around this time, the Empire or Regency dress became popular as daytime wear, with evening versions being made of more luxurious fabrics and trimmings and cut with lower necklines.

During the 19th century, ballroom gown skirts progressively evolved from the classic lines to much fuller skirts and sleeves, with necklines often changing (usually going lower) with them. This was also the time when a distinction between dinner gowns (formal dinners and soirees), evening gowns (dance and theater), bouffant gowns (opera), and ball gowns (balls and the most formal events) was established.

In the 1920s the boyish silhouettes became popular. The 1930s embraced the Empire cut while introducing artificial fibers and bias cuts. This eventually gave way to the A-line, mermaid skirts, sheath and trumpet shapes. Dropped waists started becoming popular, too along with the princess styles. The 1950s favored muted elegance and ladylike appeal, much the way the era’s fashion icon, the late Princess Grace of Monaco loved them.

Back to the present…

Notwithstanding all the centuries of fashion trends, the full-skirted ballroom gown remains the one true image of formality, prescribed for formal dinners, red carpet events, formal dances, the opera, evening weddings, theater premiers and charity balls.

For dance competitions in particular, vivid-colored ballroom gowns trimmed with stones and sequins are worn by the dancers for the Smooth dances; Viennese Waltz, Waltz, Tango, Foxtrot and Quickstep. These dances involve graceful swings and swirls, movements that are enhanced by long billowy skirts. The dress trimmings also catch the spotlights making the dancers stand out on the dance floor. Fabrics favored these days are highly stretchable to allow uninhibited movements.

Whether for formal affairs or dancing competitions, ballroom gowns epitomize elegance and style. They will endure for as long as women all over the world celebrate their femininity. 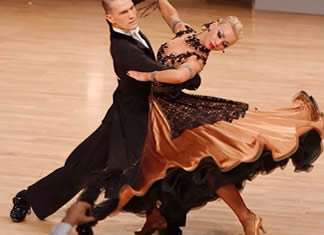 Choosing a ballroom dancing gown for your body type 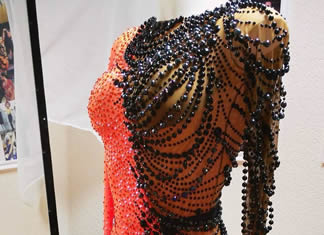