Home Dance Dresses Fashion What are some of the more popular and the not-so-popular design trends...

Latin Gowns: Past and Present Trends

Latin gowns have a distinct look, with some standard design elements that differentiate them from ordinary evening gowns or formal wear. They are constructed with one prime purpose in mind, to capture and hold the attention of judges and spectators at dance competitions while making it possible for the dancer to execute all her dance moves freely and gracefully.

American and International-style Latin dances like Samba, Cha-Cha, Rumba, Paso Doble, Swing, Mambo and Jive all have different moods and tempo. A well-designed Latin gown will work well for any of these dances even with their variations in speed, spins, flicks and kicks. Latin dance gowns are typically never full-length and are more extravagantly trimmed with an assortment of sequins, beads and Swarovski rhinestones.

Designing and choosing a Latin gown needs careful consideration as nobody wants to wear an obviously over-embellished dress. We all want to go for the classy and tasteful look instead of loud and cheap. A designer should be able to strike the delicate balance between what’s classic and what’s dated and has to be knowledgeable about the latest trends.

Latin dance costumes have been subject to fewer design trends compared to Smooth dancewear, but they do have a few to speak of:

• Nude Colors – give the illusion of nakedness, emphasizing the sexy and suggestive dance moves. Nude fabrics are most naturally complemented by the use of plenty of glitter, usually rhinestones and/or sequins.

• Cupcake or Flamenco skirts – have enjoyed a very good run in the world of dance but have since waned in popularity and are now generally regarded as old-fashioned or dated.

• The peacock-look – is not for everyone. Not very many can get away with this dress trend and as a result it never quite made it.

• The dropped-waist-look – is a continuing trend even on regular fashion circles.
• Feathers – have always been used on Latin gowns even if never in the mainstream, indicating that they may have been generally accepted but never quite became favorites.

• Longer hemlines – have been started gaining popularity over the last 5 years compared to the “barely there” look that has somehow become the trademark (or reputation) of Latin dance dresses.

Latin gown design trends, much like those in mainstream fashion, will always be just that, trends. They come and go. They will be super popular one day and then be gone the next. Some are fairly more enduring than others and over time come to be regarded as classic styles. Some trends lend themselves well to subtle evolutions, enabling them to survive the dancing public’s ever-changing fashion tastes.

What’s more important is for dancers to figure out what style of Latin gown they are most comfortable wearing and which ones reflect their personalities and dance temperaments. The way they carry themselves in their dress will ultimately matter more than whether they are wearing the top trends. 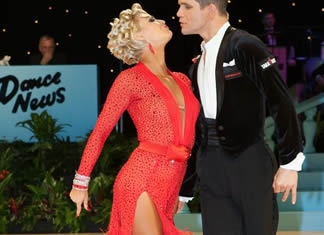